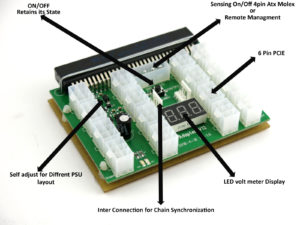 Built-in (16) PCI-E connectors on board for quick easy connect. 120Amps rated. It can power ASIC Miners as well as GPU. Multiple modes available

The X12 chain sync breakout board retains the quality of the X11 while fixing a compatibility issue with multiple Lite-On power supply units. Fully tested before shipping. The X12 can operate in multiple modes. Use this adapter with ASIC miner and GPU mining rigs to mine bitcoin and other cryptocurrencies. Featured modes include: 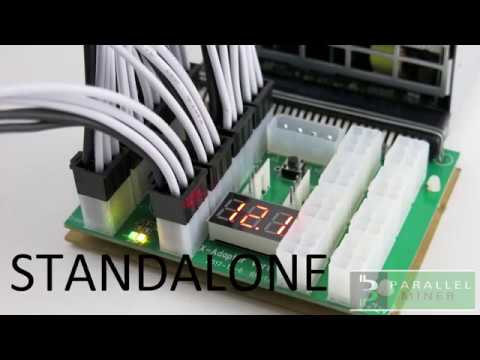 Got something to discuss?

Harry, thank you so much for the confirmation! We really appreciate it.

No, it is not compatible. You can find our full breakout board compatibility list here: https://www.parallelminer.com/uncategorized/breakout-board-compatibility-list/.

Hi, is it compatible with 1000w HP psu regardless of part number?

No, it’s not compatible. Please provide HP part number and we will confirm

When will new stock be available?

What is the difference this and the x11?

When will this restock?

Hello I’m using this breakout board and meter is moving from 12.0 to 11.9 is this ok or is there a problem?

Thanks for the clarity.

I bought two of these x12 to pair with D1200E-S1 but they are not working. Normally with other breakout boards from Parallel miner led will light up with just power cord plugged in. please advise.

It is not … we are working on a new Board for these narrow footprint power bar.

Heyo. I’ve just received an X12 and am using it with a PS-2112-2D1-IF. It is on the list as a compatible PSU. However, when I turn it on the PSU and X12 light up green for about 10 seconds and then the lights go to yellow. Is there a way to fix this?

can i connect the molex cable from my ATX PSU into this board for the sync on/off?