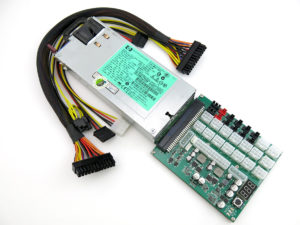 This 1200 Watt Platinum power supply features our new X-Adapter ZSX 16 PCIE port with 24-pin ATX, Molex and fan ports covering all of your mining rig power needs. Improve your ROI by upgrading your current PSU set up to this 94% Platinum certified PSU. Fully tested before shipping. PSU Kit is intended to independently power ASIC miners or GPU's and their risers in a 24/7/365 mining rig environment.

Built from its predecessor, the ZSX GPU mining all in one breakout board retains the quality of the X11 while adding several new features not seen in the industry. It is compatible with two different types of PSU layout, it is backward compatible as a replacement for the X8, X6B, X7B, and X11. Further, it can operate in multiple modes.

The ZSX is the first of its kind to include a full ATX PICO 24pin connector to directly power your Motherboard, CPU Power, and an HDD or SDD. Additionally, it features built-in Fan HUB to power up to 10 Fans. The ZSX is truly the single board for 100% GPU mining rigs.

Compatible GPU Video Cards (Not Limited to GPU's on this list):

Got something to discuss?

I am building a portable PC and I need a low profile power supply such this product. I am using an (Intel Core I9-9900K Desktop Processor 8 Cores 95W ) with an 8 pin connector. I need to know which pin slot is compatible with the CPU connector? Also is there a diagram I can access? Thanks from Canada

The ATX 24pin cable kit includes a 4/8pin CPU power cable. You can see in the pictures here as well as diagrams for precise dimension. https://www.parallelminer.com/product/zsx-breakout-board-16-ports-pico-24pin-atx-fan-hubs-100-gpu-mining-a-game-changer/

Hi, I have connected it to asrock btc motherboard. The blue light on the breakout board does not turn on. When I press the power button on the mobo, it just blinks once. Please help

With the 4-pin Molex for SATA input. Provide power to 1 HDD/SSD on your motherboard. With the H110 BTC+. Do i plug the Sata cable to the mother board also? Also can i daisy chain to get an extra sata power to have two sata power from the board. Molex port?

I assisted you via e-mail already, but in case any other customers have the same question: the Molex SATA port on the ZSX is meant to power the 1 (optional) SSD. For the Molex ports on your mobo, you should use cables such as: https://www.parallelminer.com/product/pcie-6pin-to-molex-4pin-female-24inch-16awg-12volt-only/ (with this splitter if your mobo has 2 ports https://www.parallelminer.com/product/4pins-molex-y-splitter-cable-adapter-6-inch-long-highest-quality-cables/ )

The ZSX manual is available here as a PDF.

Hello,
How do I use the interconnect cable to use multiple power supplies in parallel? I do not see any additional information about this on your website.

We know some customers have successfully put our PSU in parallel, thus double the current. However, we do not recommend it. That said if you mean sync them together you can see how in this manual https://www.parallelminer.com/wp-content/uploads/2021/01/ZSX-Breakout-Board-Manual.pdf

We have Biostar TB 250 pro in the office. I will set one up tomorrow, posting and snap pictures for you. Have populated the Molex 4pins on the motherboards? Do you have an ATX standard PSU you could test with to eliminate the possibilities? I mean if you cannot post using an ATX PSU then the ZSX is not the issue.

Hello, wondering which 4-pin to connect to in order to synchronize with another ATX powersupply?

Using this kit, but not quite enough power for my rig and want to utilize an ATX powersupply. Only going to use the 6-pin VGA from the server PSU. Is it possible?

They are two Molex 4pin, one in the middle mark SATA and one closer to the PSU. This is the one you would use to sync an ATX PSU. From the ATX PSU, you connect a Molex 4pin power into that port. Once its sense a change in power from on to off from the ATX so will it turn on/off

Heyyyy it works! Thanks

Would the synced ATX PSU use the same slot as the remote power management module?

Is it possible to use a synced ATX PSU and the remote power management module at the same time?

I have this running but the fan noise is ridiculously loud. What can i do so the PSU fan isn’t running at 100% all the time.

Hi, when will this be back in stock?

Any word on restock for the ZSX? I’ve signed up for stock notifications, and a couple times received emails, but they still show as out of stock….?

Im sorry im asking here. Been trying to get this working for almost 2 weeks. Even bought a new motherboard to test.
I have send videos of my issues to your mail (Missa-Lynn)
Raised ticket 55909 which got a reply, i responded with pictures and details and ticket got deleted.

Any updates on when this will become available again? So eager to put this in my system!

How hot should the PS get? I have 5 cards running and 4-140mm fans. It’s pretty hot to the touch. Hot enough that I feel like I need to hook up another fan just to blow across the PS.

They can run hot when pushed near max capacity. They can run hotter when push above max capacity! Be mindful this 1200 is rated at 900watts when connected to AC 120. In the end, they are thermally protected and will shut down if they reach the threshold.

ok. It is on 220 and only pulling 400w currently. It just seems hotter than I would like or think it should be without adding some additional cooling to it. This is my first one of these PS from you guys so I’m just making sure it is ok.

Is it possible to have the option of the longer (36 inch) cables with these kits?

You can always have the extension 16AWG .. This one https://www.parallelminer.com/product/17-inch-16awg-6-pin-female-to-8-pin-62-male-pcie-power-cable-extension/

Ok. I’d rather just have the longer single cables instead. One of the reasons I like buying the kits is I save a lot of money on the cables since they’re much more expensive by themselves. 16x of the 24in cables are $55.84. 16x of the 36in cables are $73.44 and 16x of the extensions are $43.04. It’d be nice to have the option for longer cables in the kit and save money overall.

Ordered the all-in-one kit and received it, after hooking everything up the PSU won’t power up, tried removing cable like 24pins or PCIe but still won’t power up.
Contact through contact page but no reply from the team so far. please help

Hi, Please see the following. I’m positive you will find the solution https://www.parallelminer.com/uncategorized/wiring-guide-for-all-in-one-zsx-board-and-motherboards/. We are 3 days behind on answering tickets

I’d ask the moderator to delete your reply as these links do not answer what the length, width and height of the PSU and ZSX board are. If you have the dimensions that would be more helpful. Thanks

Any idea when this will be back in stock? Looks great!

By Thursday this week

I am eagerly awaiting my delivery this week. I have a few questions. I need more power and your out of stock. That said I see you can use an ATX as a dual source with your Molex sync connection correct? If so how do you recommend to use this setup until I can get more of your product? Run MOBO and SSD from ATX and GPU’s (8 RX580’s) 1200W Server PSU or split risers/GPUs across device to even power?

Hi Jeremy
We will have plenty of stock arriving in a few days. GPU’s & Risers will be more stable when on the same source of power, use our splitter from 16AWG to 18AWG between the riser and GPU’s. Not only will you be on the same power source but the same power cable for each GPU/Riser pair. You can power everything else from the ATX. Connect the (1) large 4pin Molex from the ATX into the X11/ZSX. Once that is done when you power on/off the ATX the breakout board will follow.

Can I use the Middle Molex port and splitter to run 8 fans? I have 4 that are molex and 4 that are SATA so this splitter seems like a perfect fit. Will it power fans or do I need a 6pin to Molex Adapter for this?

At your own risk! What you would need is this https://www.parallelminer.com/product/pcie-6pin-to-molex-4pin-female-24inch-16awg-12volt-only/